Where is my Friend?!

I have posted that recently that I have a problem with pests on the farm. In my humble opinion all farms have a pest problem. It’s really only a matter of if the farm acknowledges it and how successful they are at managing them.

Well, I don’t like using poison if I can avoid it. It deters the natural predators who, in my opinion are far more effective than me. Not to mention it leaves me with dead rat bodies. Eeww. That leads to the others, the ones I refer to as my friends.

Others I know who keep a flock question my tolerance of it, since many who would prey on the mice would also prey on the birds or eggs. Things that eat mice often enough include snakes, foxes, raptors, cats, and dogs. My dogs are useless for that, so that’s not an option. While I intend to get some fixed feral cats at some point, I don’t have any yet. I don’t fear them the way others do, because even if Lucy doesn’t scare off the rats and crows, my dogs and other animals fear her very thoroughly. I think the others manage because she doesn’t care about them.

Which friend is it I am referring to then? I recently had a young rat snake in the rafters of my shed aka feed and tack room. I was thrilled to see him. This is not my first sighting of a scaly friend, but the last one was much older, more mature, more successful. I didn’t mind the youngling, it’ll grow. I waited patiently for it to get comfortably onto the platform laid on the rafters. I quietly got the feed and got out, hoping not to disturb him. Unfortunately the little one became too scared and has gone MIA. I know because of the recurrence of his diet. So, if you see him, SEND HIM BACK! Free Food! 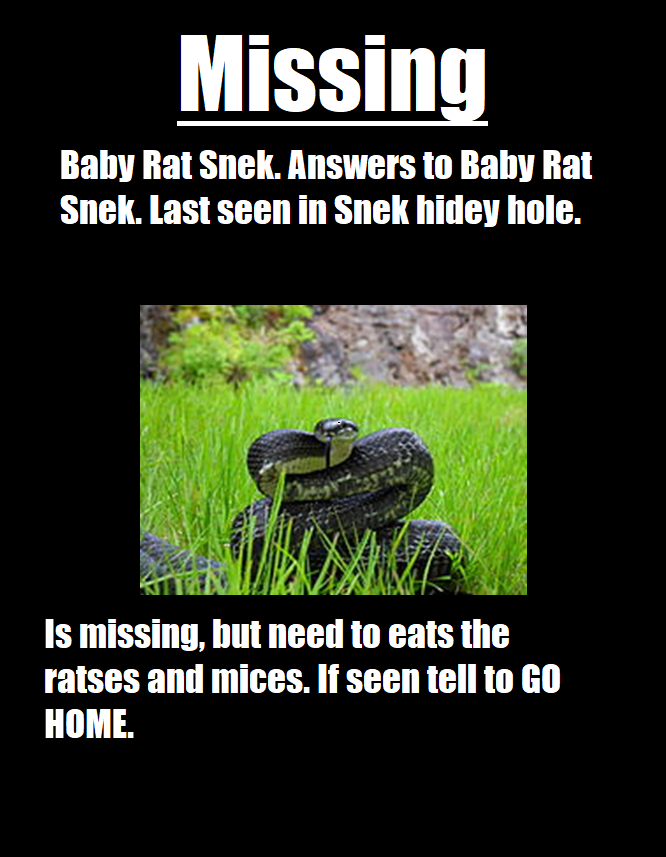 ← The Thing About Rats
Not Cool →